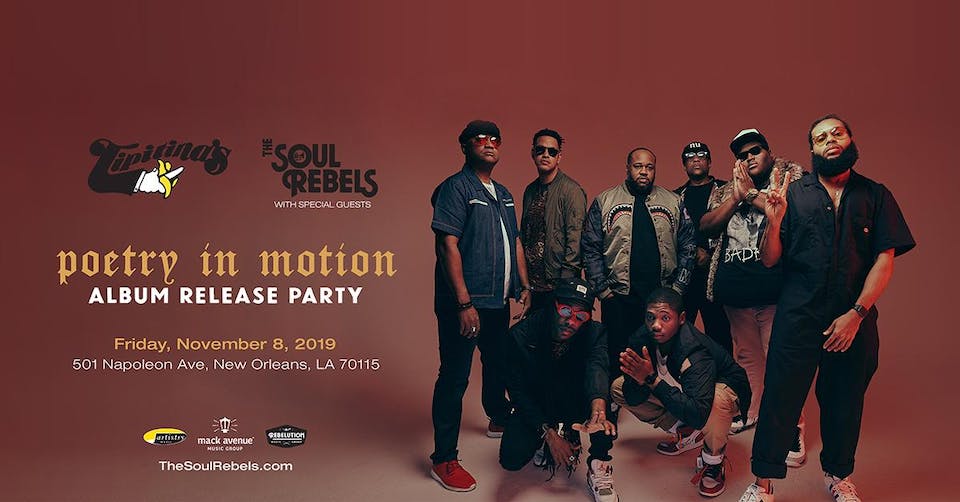 The Soul Rebels started with an idea – to expand upon the pop music they loved on the radio and the New Orleans brass tradition they grew up on. They took that tradition and blended funk and soul with elements of hip hop, jazz and rock all within a brass band context. The band has built a career around an eclectic live show that harnesses the power of horns and drums in a deep pocket funk party-like atmosphere. The Soul Rebels continue to chart new territory as they feature in major films, tour globally, and combine topnotch musicianship with songs that celebrate dancing, life, funk and soul.

Most recently The Soul Rebels wrapped up recording for their upcoming fall 2019 album, Poetry in Motion. The album will put the band front and center and showcase the wide breadth of musical genres and special collaborations that have come to identify the musically chameleon-like band.

“The Soul Rebels are the missing link between Public Enemy and Louis Armstrong.” -VILLAGE VOICE

“Brace yourselves folks, these men are quickly solidifying themselves amongst NOLA’s proud big brass elite… and seem intent to sublimate the homogenoustones of the contemporary urban music landscape with the lush instrumentation of our culture’s root.” – OKAYPLAYER

“The Soul Rebels are rebelling against one, albeit detestable thing: starchy paint-bynumbers music.” – VIBE

- Ages 18+
- Must have valid Government-Issued ID -OR- Passport to enter
- No professional cameras or rigs (cameras with removable lenses)
- Purchaser must be present (with valid photo ID -OR- Passport) to claim Will Call Tickets
- Name changes must be made at least one hour prior to Door Time - Contact Eventbrite Customer Service by phone 855-872-1525 or email at attendeesupport@eventbrite in order to make a name change
- All sales are final
** Tipitina's Box Office is open 10:00am to 4:30pm Monday-Friday **
Venue Information:
Tipitina's
501 Napoleon Ave
New Orleans, LA, 70115