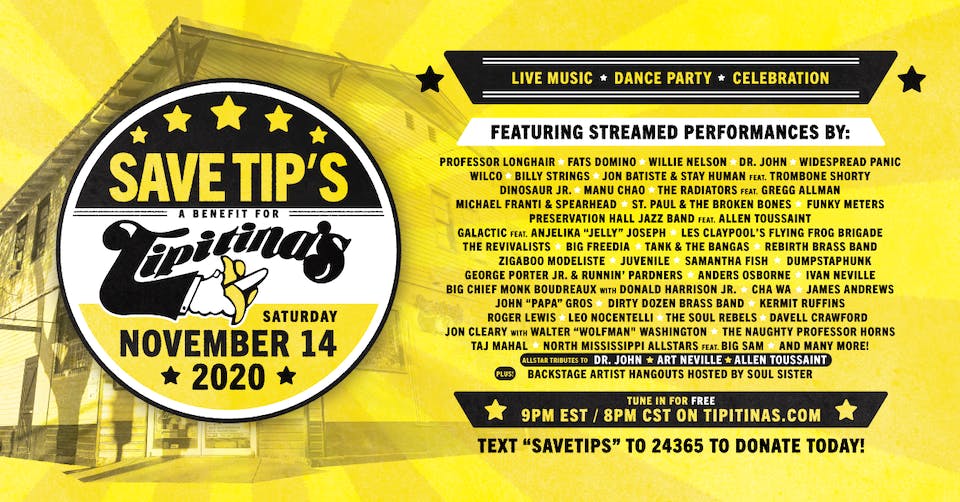 We're proud to announce SAVE TIP'S!

The multi-artist live music celebration will be free to access and take place on Saturday, November 14th at 9PM EST / 8PM CST / 6PM PST and will feature the most beloved current and legendary performers from New Orleans and beyond that have felt the magic of Tip’s.

The event will feature performances and exclusive backstage content from over 35 artists including a special celebration of New Orleans music featuring tributes to Dr. John, Allen Toussaint and Art Neville.

These artists join us as they help keep the music going by helping raise much needed funds necessary to keep the venue afloat as we ride out the pandemic shutdown.

Beginning today, Monday November 9th YOU can donate directly to the venue as well as participate in special fundraising sweepstakes offering prizes chosen by the staff at Tipitina’s and its supporting artists.

- Once-in-a-lifetime trip to NOLA and take in a show in style on the occasion of the venue’s re-opening.

- Win Tipitina’s “Top Banana” lifetime access to the venue for you +1 …any public show, anytime!

St Paul and the Broken Bones

Tipitina’s has been a vibrant hub of New Orleans’ culture and music for over 40 years and has hosted some of the most legendary acts in the world while attracting hundreds of thousands of fans from across the globe. The COVID-19 pandemic and subsequent social distancing regulations have had a heavy effect on the legendary venue putting its future in peril as it, like thousands of other independent rooms, hasn’t had any revenue since being shuttered by the pandemic. “In late 2018, our band took a huge leap of faith to purchase Tipitina’s,” said Robert Mercurio, owner of Tipitina's and member of the band Galactic.“ It was not because we wanted to own a venue, it was because we had a chance to save our favorite one in the world. But now we could really use some help to keep saving this national treasure. So in true New Orleans fashion we decided to throw a hell of a party to celebrate this musical institution.”

To support the benefit, Tipitina’s and Fandiem --- a digital sweepstakes marketplace featuring virtual and in-real-life experiences catered to music fans -- are offering an exclusive collection of prizes integrated into the livestream platform and performances. These prizes will include the Ultimate NOLA Flyaway, an all-expense paid three-day weekend in New Orleans featuring VIP access to the first return show at Tipitina’s, access to a New Orleans-themed catered soundcheck, band meet & greet, and a mega merch pack from the venue as well as a virtual backstage Zoom Hang with Galactic’s Stanton Moore and Robert Mercurio. Sweepstakes will be made available to the public beginning Monday, November 9 and additional exclusive sweepstakes prizes will be added after the November 14 livestream event. All net proceeds from sweepstakes entries will benefit Tipitina’s.

About Tipitina’s: Tipitina's is one of New Orleans' most iconic music venues of all time. It began as a neighborhood juke joint, established in 1977, by a group of young music fans (The Fabulous Fo'teen) to provide a place for Professor Longhair to perform in his final years. The venue, named for one of Longhair's most enigmatic recordings, "Tipitina," has survived in an ever-changing musical climate despite changing ownership and briefly closing in 1984. In December 2018, Tipitina's was purchased by the members of the New Orleans-based band Galactic from the previous owners, who had owned the venue since 1997.

About Fandiem: Fandiem is an all-in-one platform and marketplace that gives fans the opportunity to win virtual & live experiences with their favorite artists, festivals and venues. Born during the early months of the COVID-19 pandemic to support artists and events as they weather the storm and as a vehicle to do good by supporting charitable organizations, Fandiem is the premier destination for fans to engage their favorite music heroes and give back to worthy causes at the same time. For more information on Fandiem visit www.fandiem.com. 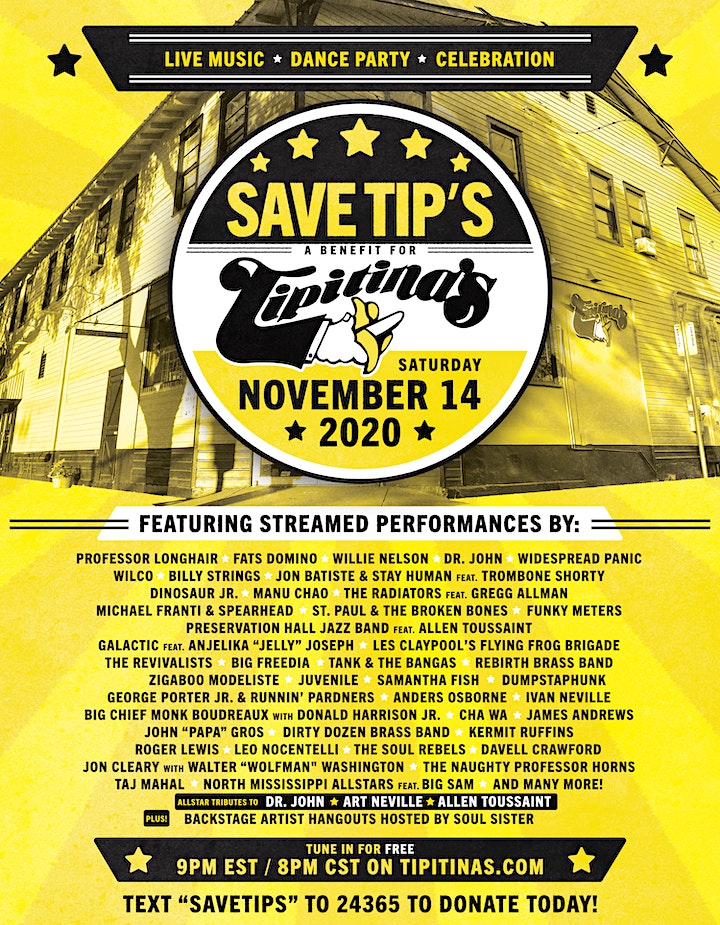