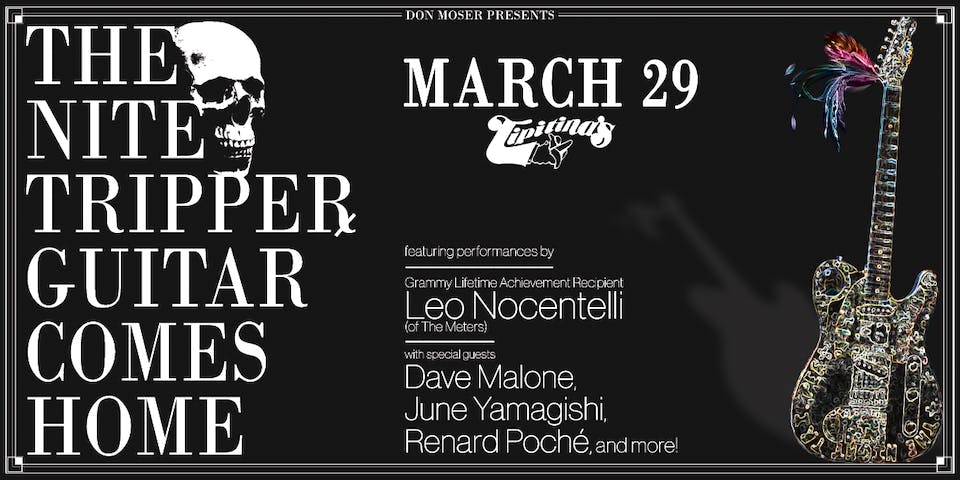 Don Moser is a professional musician that cut his teeth on the Chitlin circuit as band director for legendary soul singer Miss Lavelle White. After coming off the road, he began to build guitars to celebrate African American folk and blues and give the people a peek inside the supernatural world. His work can be seen in some of today's top museums from The National Museum of African-American History and Culture at The Smithsonian to The Rock & Roll Hall of Fame.

When asked what inspired the Dr. John "The Night Tripper" Guitar he said, "Dr. John changed the whole game. Nothing would ever be the same. I had to build this one. My guitars were in some of today's top institutions and now it was time for one to return to the dirt, and what better place then Tipitina's! When Leo signed on, it was a dream come true," Moser said. "She's good to go, she sounds like the devil moving furniture!"

The guitar has been on a world tour with Robert Randolph and Eminem in the hands of master guitarist Ray Holloman, and will be coming home to New Orleans...

Don has teamed up with legendary luthier Billy Asher of Asher Guitars and Temple of Tone guitar cases for "The Night Tripper" Guitar.

- Ages 18+
- Must have valid Government-Issued ID -OR- Passport to enter
- No professional cameras or rigs (cameras with removable lenses)
- Purchaser must be present (with valid photo ID -OR- Passport) to claim Will Call Tickets
- View and manage your order online by following the link provided within the confirmation email sent upon purchase
- Online ticket sales will cease when doors open
- All sales are final
**Tipitina's Box Office is open Monday-Friday 10:00am-4:30pm**
Venue Information:
Tipitina's
501 Napoleon Ave
New Orleans, LA, 70115